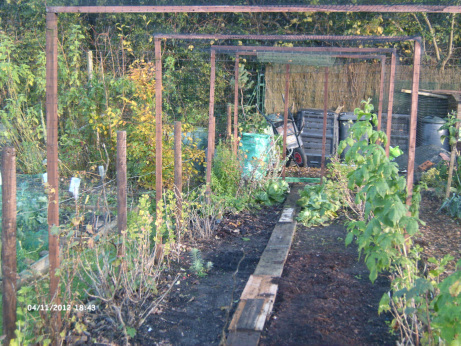 My first early potatoes (Red Duke of York ) have just started to come through which I'm pleased about .I hadn't chitted them this year due to lack of space and I want sure how much this would affect their growth .  However so far so good .Earthing up is now important to protect the young leaves from ground frosts which can still occur at this time of year.
I'm trying to grow Globe Artichokes again this year  from seed and some from the small plantlets that which grow from the base of established plants. Globe artichokes take up a lot of space and are often grown purely for their  attractive silvery grey architectural foliage. They do take up a lot of space however it is considered that two plants is sufficient for an average sized family. New flower buds should picked from new plants as soon as they appear and not allowed to develop in order to allow the crowns to become strong.
In my greenhouse at the moment I have several courgettes all grown from seed which are doing very well and should be ready for planting out in the next 2 weeks. Courgettes are best picked when they are small an tender however one can be left to grow to its maximum size and will eventually become a marrow.
I also have three varieties of tomato in my greenhouse - Moneymaker, Gardeners Delight and Marmande .Tomatoes must be one of the easiest plants to grow an I have had a very high success rate with the germination and no damping off.   They are still not quite at the size of the shop bought plants however and it will be another 2 weeks before I plant them up in their individual growbags /planters.
My apple trees are looking very attractive with many blossoms and I have noticed a fair number of bees around so hopefully this year I will have an apple crop.
I've propagated around 12 new strawberry plants from the runners taken from plants bought last year and these will form a new bed to replace my older plants. the problem is being able to identify where the old plants are so some form of segregation/labelling is needed. It is recommended that strawberry plants are replaced every 3 years as they stop being so productive after this time.
As I've ran out of space on my allotment due to planting too many potatoes I have decided to sow my lettuce in troughs - this will allow me to keep it in the green house and ensure better germination .I've gon efor Rocket as this has a nice peppery flavour
My asparagus bed has started sprouting but the results are very mixed - some are very thin and some are very thick whilst some have not yet come at all .I'll have  to read up on this as there does not appear to be any reason for this large variation in the size of the spears .
Other planting which can be done at this time of year - successive sowings f carrot, lettuce, beetroot, spinach, parsnips, spring onion, swiss chard, early peas, turnips, radish, kohl rabi , maincrop peas, summer broad beans, runner beans and French beans.
Planting in individual pots  under glass - pumpkins, squashes, courgettes, sweet corn , runner beans.