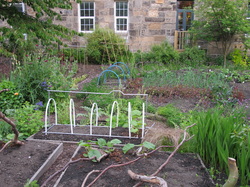 February was pretty wet and March looks as if it will be similar based on my recent experience. There is no point in any digging on my plot at the moment as the soil is high in clay and very soggy. I’ve dug in lots of leaf mould over the last two years and this has helped to some degree but I am a long way from the crumbly light brown soil shown in all of the gardening manuals I look at.

We have noticed some recent rabbit activity on our site over the last few months and need a natural predator to deal with this problem.  We’re not sure if the rabbits are captive and breading inside the allotment site or whether they have breached the ‘rabbit proof’ fence. It will probably take a very careful examination of the fence to determine if there is any week point.  Rabbits were never much of a problem before when we had a fox  resident in a wild part of the site ,however it has not been seen for some months and may have had an accident .

One subject which has courted controversy over the last year is the subject of whether bees should be allowed on allotment sites.  There is a very good case to be made for these natural pollinators being situated within allotment grounds. However the main concern is where they are located near residential property and may sting the unwary. Provided the hive(s) are managed and maintained by someone with the necessary expertise in bee keeping however and kept at a suitable distance from individual allotment plots then the risks are fairly small and  this is a subject worthy of further consideration.

I have planted some individual specimens of common cottage garden type plants and shrubs at various points throughout my allotment as a means of attracting bees and  other  pollinating insects  including hollyhocks, phacellia, foxglove, penstemmon, lupin, rosemary aquilegia, delphinium and bhuddlea. There are many other flowering plants which can be used to brighten up and add wonderful  perfumes to your plot without taking up much space .

Finally, it is not too late to plant an apple tree on your plot. You must chose carefully however as there are some varieties sold in garden centres which are totally usuited to the colder Scottish climate (as I have found to my cost).

Listed below are some examples of apple trees which will grow well in our climate. Some but not all of these have frost resistant flowers. It is important to have another variety of apple tree nearby which is in a pollinating group above or below the variety you have planted.  Some apples are triploid and need two other pollinating partners. However it is possible to buy apple trees which have three separate compatible  varieties on the  one  tree.