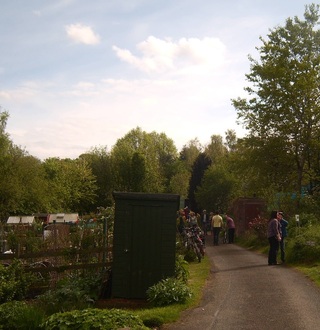 The weather in Edinburgh has been consistently sunny over the last 4-6 weeks and this is reflected in the growth of all of my crops and the weeds . After a weeks holiday I found my fruit cage had  become almost impenetrable with new growth from the gooseberries which had become a  tangled mess with sticky willies and nettles which  I hadn't known were there.

Jobs to be done on the allotment  -


Remove any mould strawberries affected by grey mould (Botrytis) as this can quickly  spread to other fruits.

Summer raspberries are coming along nicely at the moment and taste much better than the supermarket bought ones especially when eaten straight from the bush. As  soon as raspberries have finished cropping prune out the old canes and tie in the new ones.

You  should aim to complete the Summer pruning of all your trained fruit trees and bushes by the end of July, but delay this if the weather is wet because this can encourage water sprouts near cut branch tips .


Complete the thinning of apple trees as too many apples close  together on a branch can promote disease and the apples may not develop as well- also  support heavily laden branches to stop them breaking .


Train in new canes of blackberries keeping a few longer ones so that tip layering of new plants can be done  at the end of the month.

Hand pollinate flowers of your marrows and courgettes  if the fruit is failing to set.

Pinch out the new side shoots of cordon  tomatoes as this prevents unnecessary leaf growth  and encourages the fruits to develop quicker. Tomatoes may split in drier spells if they are not watered enough.

The flowers of outside grown tomatoes and runner beans should be sprayed with water to ensure a good set of fruit.

Thin out your carrots and beetroot as they start to fill out.