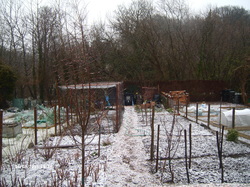 The FEDAGA seed potato order is being delivered on Thursday 18th February to Inverleith  Allotments  and will then be sorted out into the individual site orders . Anyone who is interested in helping sort out the orders should make their way along to  Inverleith allotments for 10.30am.

There are mixed views on chitting potatoes . I believe it is a good idea to chit them  after purchase up until the time you are going to plant them . They should be placed in trays in a cool frost free room or cupboard with low level indirect light. The potatoes will develop short stubby roots to get them off to a good start when they are planted in April .

Any volunteer potatoes from last years crop which are found should be removed as they could harbour blight and other common diseases.

Now is a good time of year to get on with all of the other jobs which can be forgotten about during the growing season such as cleaning down your greenhouse to remove moss/algae mould spores and overwintering pests. Clean glass also improves light transmission. While there are still ground frosts it is also a good time to dig over the soil in your beds and allow the frost to help break down any large clumps.

Rhubarb can be forced by placing an old bucket over the top of the crown and I have noticed some of my plants have already started producing new growth.
It should be noted that if rhubarb is forced it weakens the crown and can take two years to recover.