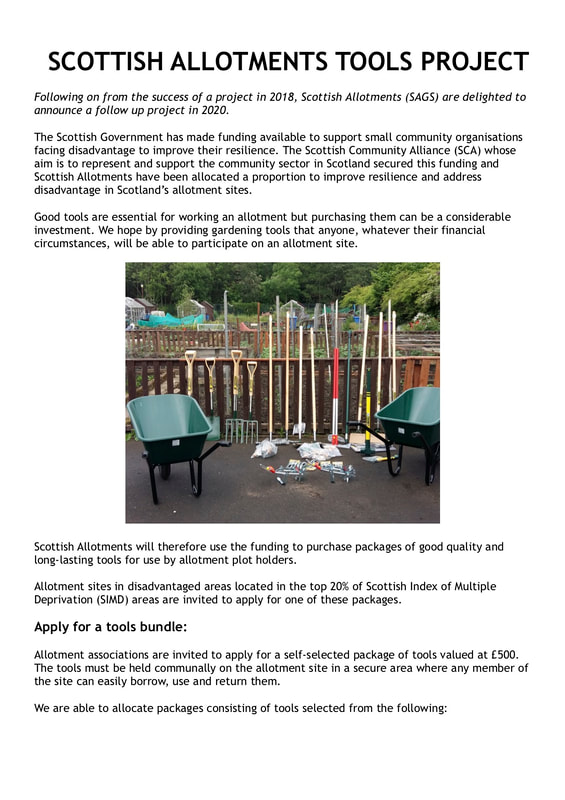 "Good Governance", the latest in the series of SAGS booklets on the Key to Successful Allotments can be read here.
SCOTLAND’S ALLOTMENTS SAVED FOR THE FUTURE


The Scottish Allotments and Gardens Society (SAGS) is pleased that the Scottish Government has listened to its concerns regarding Part 7, Allotments of the Community Empowerment (Scotland) Bill (CEB), and the amended Bill which was approved in its final debate in the Scottish Parliament on 17th June 2015 will protect and enhance Scotland’s allotment community going forward.

The key elements of the CEB relating to allotments are :

Local authorities will be required to not only consult with Ministers prior to closing an allotment site, but will also need to provide a replacement site locally if there is still demonstrable demand.

Working an allotment plot is a long term undertaking, and cannot be carried out under the threat of eviction. Statutory protection of allotments is key to giving people the confidence to invest the time and energy required to maximise the productivity of their plots.

The Bill defines a standard allotment plot as being 250 sq.m. in area, with the flexibility that people can ask for a smaller plot if 250 sq.m. is too large for them to manage.

250 sq.m. is the size of plot that for more than half a century has been accepted as the area needed for a family to be reasonably self-sufficient in fruit and vegetables, and this scale of growing is a key differentiator between allotments and other types of community growing projects.

In a time of increasing reliance on Foodbanks, the ability of people to be able to grow sufficient fresh, nutritious food to have a significant impact on their family’s diet and therefore enhance their health and well-being is essential.

Long waiting lists for allotments are a well-known problem, with some aspiring plotholders languishing on them for 10 years or more in urban areas. The 50% and 5 year trigger points, as well as the requirement for local authorities to produce an annual report detailing, among other things, what steps are being taken to reduce waiting list to below the trigger point levels, is expected to contribute to a substantial increase in the number of allotments in Scotland in the coming years.

The Bill states that allotment rents must be calculated on a basis that is fair and reflects the level of services provided and the plotholder’s ability to pay.

This clause in the Bill is a key social justice issue, as it ensures that allotments will be affordable to everyone in and will not simply become a hobby of the middle classes, as would become the case if rents were allowed to rise to reduce demand.

FEDAGA congratulates SAGS on the passing of this bill, which promises to make significant improvements for allotments in Scotland.