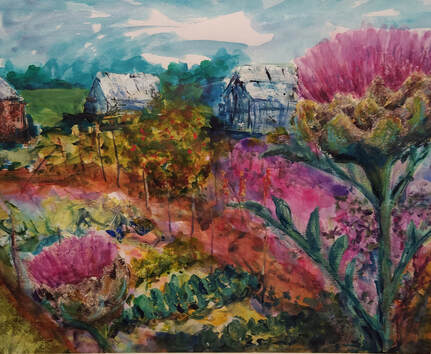 Our Allotment - Lucie McKenzie
This year has been exceptional in many ways. At first there were concerns that we'd be locked out of sites, so we planted potatoes earlier than ever. Fortunately the weather was kind and Michael Gove said he thought allotments should stay open as their very nature kept people distanced. That was such a relief to everyone.

We had a bit of a misunderstanding of the rules early on when the police informed everyone by megaphone to go home 'You've had your 30 minutes'. We had pensioners hiding in their sheds until the police had gone. The early days of lock-down were such a contrast to how life had been before.

As the situation continued, plotholders found they had more time to spend tending their plots. Consequently, many commented that the site has never looked better. Seeds also became difficult to obtain as everyone retreated into their gardens, so packets and plants were shared adding to the communal spirit we all enjoy but also wish more people could.

Waiting lists in the city swelled at eight times their previous rate. Clearly there is such a demand that needs to be addressed to allow more people to grow food themselves and enjoy the benefits to their physical and mental health. I hope the post Covid world will focus much more on people and spend public money more proactively.