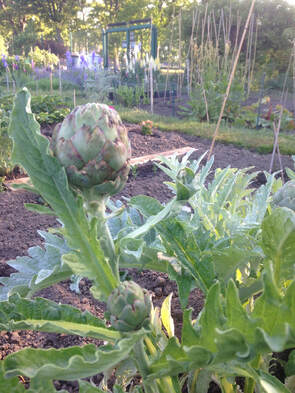 Thanks to the extra time I found available from late March until early July 2020 due to the Covid -19 lockdown in Scotland, I was able to look up at information available on globe artichokes and thistles. One can easily notice that the globe artichoke is a popular plant in the Inverleith allotments. Are the artichokes grown in the allotment plots for their food potential or rather for their ornamental presence, or for both?

Thistles are known to everyone who has some familiarity with Scotland and its history.
The Thistle is the national plant and emblem of Scotland since the reign of King Alexander III, in the 13th century. How then could thistle, a noble and distinguished plant, be related to globe artichoke, a humble plant grown in Council owned allotments in Scotland?

The globe artichoke is a thistle species variety that is cultivated mostly as food in many parts of the world. The artichokes are described by the Royal Horticultural Society (RHS) as perennial plants, which are grown for their edible buds and are ornamental enough for the flower garden. A single artichoke is the unopened flower bud of the plant.
One can find a wealth of info for this food in the U.K. in the following websites:
A)  https://www.newcoventgardenmarket.com/blog/chef-guide-artichokes , and
B)  http://www.eattheseasons.co.uk/Articles/artichoke.php

Artichokes are naturally grown around the Mediterranean basin region. Italy seems to be the largest producer and exporter of globe artichokes.

How does one grow a globe artichoke in an allotment plot in Scotland?
One can raise this plant from seeds, or obtain ready seedlings or utilise cuttings from the roots of an artichoke plant.
How does one process a fresh globe artichoke for placing it on the table as food?
This requires extensive processing, and discharge of most parts of a fresh raw artichoke, including the fibrous choke from the bud, for one to retain the tender part of the bud.  One may find a demonstration of how one can peel an artichoke in the short YouTube video below:
https://www.youtube.com/watch?v=y1K5c8fGSGk

How does one eat the buds of globe artichokes?
One can have the buds chopped into smaller pieces (rubbed with lemon) and have them raw as part of a salad or cook them, along with say potatoes, as a side dish.
Which is the natural season of artichoke plants producing their edible buds or globes?
In the U.K. the season is June to September, July being the prime month, while in say Greece and Italy it is December to early May, with April being the prime month.

How can one source this delicate food?
If one does not have fresh artichokes from an allotment or a garden, one can find fresh globe artichokes sold in small green grocery shops. In the big supermarkets one can find processed artichokes, mostly produced and packed in Italy, in small glass jars, or refrigerated.